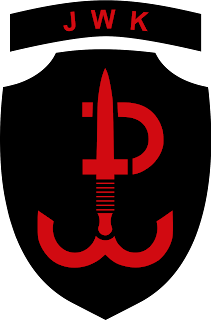 JWK was formed in 1961 and is the oldest Polish special operations unit. The unit is located in Lubliniec, Poland. The Regiment has carried out the majority of special operations that resulted in the gathering of the actual Polish Intelligence. In the early years of the Global War on Terrorism, The Regiment carried out Special Operations alongside US Navy SEALs from the Naval Special Warfare Development Group also known as SEAL Team Six.

The unit was established in 1961 under the name 26 Batalion Dywersyjno – Rozpoznawczy (en. 26th Sabotage-Reconnaissance Battalion), prior to being changed to 1 Samodzielny Batalion Szturmowy (en. 1st Detached Assault Battalion) in 1964.

On October 8, 1993, following an executive order from the Chief of the General Staff of the Polish Armed Forces, the unit transitioned from a battalion to a regiment, which led to its renaming to 1 Pułk Specjalny (en. 1st Special Regiment) before being changed to 1 Pułk Specjalny Komandosów (en. 1st Special Commando Regiment) in 1995. Even though the unit's name did not receive its "Commando" (Komandosow) moniker until 1995, it officially became a Special Operations Forces unit of the Polish Armed Forces following the 1993 executive order; making at the time 1 Pułk Specjalny the only unit subordinated to the command of the Land Forces branch of the Polish Army while at the same time operating as a Special Forces unit.

Finally in 2011 (October 1) for its 50th anniversary, the unit was renamed Jednostka Wojskowa Komandosów which at present is its current name. Within Poland's Armed Forces organization, the unit is referred to by its code number JW4101.

Current organization JWK is currently operating under the command of płk (Col.) Wiesław Kukuła. The unit operates with a combat structure comparable to Special Forces Groups, 2nd Commando Regiment and is composed of four Zespoł Bojowy (English:Squadrons), with a fourth set up by 2016; respectively ZB A, ZB B, ZB C and ZB D.

Each of these teams carry the traditions of Polish units from World War II. ZB A inherits its traditions from Polski Samodzielny Batalion Specjalny and Batalion Miotła, ZB B inherits theirs from the No. 6 Troop (Polish) of the No. 10 (Inter-Allied) Commando and ZB C inherits theirs from Batalion Parasol. It should also be noted that the headquarters detachment of the military unit also carries traditions from World War II, which are those of Batalion Zośka from the Polish Home Army resistance movement.

Current Structure:
All three combat detachments as well as the HQ & Logistics Detachment have their own insignias, all carrying on Poland's legacy from World War II.