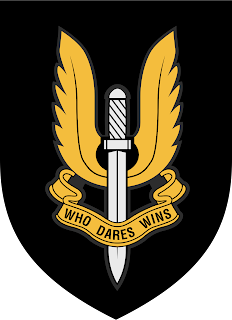 The Special Air Service (SAS) was created by David Stirling in 1941. Conceived as a desert raiding force, the Regiment inserted behind German lines in Northern Africa, carrying out sabotage missions and wreaking havoc along Rommel's supply lines.

The British Army's special forces unit, the 22nd Special Air Service regiment. Roles include Counter-Terrorism and reconnaissance. The SAS is one of the most renowned and respected special forces organizations in the world.

The first phase of selection is known as the endurance or 'the hills' stage. This is the endurance portion of selection and not only tests a candidate's physical fitness, but also their mental stamina. To pass this phase, a high level of determination and self-reliance is vital.

The hills stage lasts 3 weeks and takes place in the Brecon Beacons and Black Hills of South Wales. Candidates have to carry an ever-increasingly-heavy bergen over a series of long timed hikes, navigating between checkpoints. No encouragement or criticism is provided by the supervising staff at the checkpoints. SAS Directing Staff (DS) are fully-badged members of the regiment and leave each candidate to their own devices. This can be a marked contrast from the selectee's experience in their parent units. They would be used to their instructors shouting constant instructions at them, along with encouragement and abuse. The demands of life in a special forces unit require each member to be self-motivated.

The endurance phase culminates with 'the long drag', a 40 mile trek carrying a 55lb bergen, that must be completed in under 24 hours.

Those who have passed stage 1 have to then pass jungle training. Training takes place in Belize, in the heart of deep jungles. Candidates learn the basics of surviving and patrolling in the harsh conditions. SAS jungle patrols have to live for weeks behind enemy lines, in 4 man patrols, living on rations. Jungle training weeds out those who can't handle the discipline required to keep themselves and their kit in good condition whilst on long range patrol in difficult conditions. Again, there is a mental component being tested, not just a physical. Special Forces teams need men who can work under relentless pressure, in horrendous environments for weeks on end, without a lifeline back to home base.

The small number of candidates who have made it through endurance and jungle training now enter the final phase of selection. The likelihood of a special operation going wrong behind enemy lines is quite high, given the risks involved. The SAS want soldiers who have the wherewithal and spirit required to escape and evade capture and resist interrogation.

For the escape and evasion (E&E) portion of the course, the candidates are given brief instructions on appropriate techniques. This may include talks from former POWs or special forces soldiers who have been in E&E situations in the real world.

Next, the candidates are let loose in the countryside, wearing World War 2 vintage coats with instructions to make their way to a series of waypoints without being captured by the hunter force of other soldiers. This portion lasts for 3 days after which, captured or not, all candidates report for TQ.

Tactical Questioning (TQ) tests the prospective SAS men's ability to resist interrogation. They are treated roughly by their interrogators, often made to stand in 'stress positions' for hours at a time, while disorientating white noise is blasted at them. When their turn for questioning comes, they must only answer with the so-called 'big 4' (name, rank, serial number and date of birth). All other questions must be answered with 'I'm sorry but I cannot answer that question.' Failure to do so results in failing the course. The questioners will use all sorts of tricks to try and get a reaction from the candidates. They may act friendly and try to get their subjects chatting; or they stand inches away from their subjects and scream unfavorable remarks about the sexual habits of their mothers. Female interrogators may laugh at the size of their subject's manhood. Of course, a real interrogation would be a lot more harsh and the subject would not know that they get to leave alive when it's all over. That said, days of interrogations and enduring the stress positions and white noise break down a man's sense of time and reality. The SAS are looking for men who can withstand such treatment long enough so that the effects of revealing any operational information they might have can be lessoned by HQ.

The small number of men who make it through selection receive the coveted beige beret with the distinctive winged dagger insignia. As a newly badged member of the Special Air Service they can feel justly proud. They are not out of the woods, however, as they are now effectively on probation. As brand new members of the regiment, they will be watched closely by the DS as they enter continuation training. Many SAS soldiers are RTU'd (returned to unit) during training.

One squadron (A,B,D or G) is designated for counter-terrorism (CT) duties. The role is rotated through the squadrons every 6 months. After getting up to speed with CT techniques, the active squadron splits into two sections. One carries out training at the various SAS training facilities and is on standby for immediate response to a terrorist incident. The other takes part in exercises and is on 24 hour warning to respond.

The SAS do much of their CT training in a specially constructed house at SAS Headquarters, called the 'Killing House'. Featuring movable partitions, rubber-coated walls to absorb live rounds and extractor fans to clear out the gun fumes, the killing house can be configured to emulate various scenarios. The Killing House is used to hone the SAS trooper's Close Quarter Battle (CQB) skills. CQB techniques are practiced over and over until the various drills become second nature. Room entry techniques are perfected. The SAS troopers will learn how to deploy stun grenades, tear gas, door and wall breaching explosives, shotguns loaded with hinge-busting Hattan rounds - all designed to give the assault teams the edge in siege busting operations. Once the CT teams have developed the disciplines required, they will begin to train with live ammunition. Members of the assault teams will take turns at playing hostages whilst their colleagues burst into the room. firing live rounds into targets sometimes very close to them. The Killing House is wired with cctv cameras so the assaults can be watched back and analyzed.

The Killing House is also used by the Counter Revolutionary Wing to train for various close protection scenarios.

When they need to practice getting into buildings, the SAS will use specially built buildings on which to play. Training includes :

The SAS use a multi-story building nicknamed 'the Embassy' to practice assaults. On at least one occasion, the SAS have practiced assaults on condemned buildings, including blocks of flats.
Tubular Assaults

Terrorists have been known to take hostages aboard trains, buses and coaches. The SAS train constantly in assaulting such targets. SAS training facilities include a stretch of railway tracks complete with railway carriages for which to practice storming hijacked trains.
Aircraft Assaults

The SAS train for assaulting hijacked aircraft using a mock up of a passenger airliner at the training ground at Pontrilas, Herefordshire (see image below). The Killing House can also be configured to emulate the interior of airliners. Frequent exercises involving real-world aircraft (usually provided by British Airways) take place, complete with role-playing terrorists and hostages.

Training in the killing house and in aircraft mock-ups can only do so much. The SAS frequently stage full-scale counter-terrorism exercises. These often include all the players that would be present in the real thing - police, politicians, negotiators, actors playing terrorists and hostages and, of course, the SAS. Such exercises are designed to simulate as closely as possible the environment of a real incident so all the elements can be tested, procedures refined and lines of communications established. As with real-life, the SAS may find themselves sitting around for days whilst the civilian authorities attempt to peacefully resolve the situation. Patience is a skill that all SAS troopers have to learn.