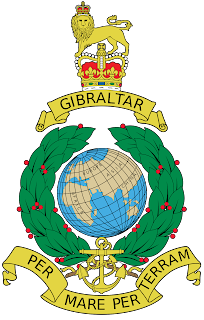 The Royal Marines (RM) are the marine corps and amphibious infantry of the British Armed Forces and, along with the Royal Navy and Royal Fleet Auxiliary, form the Naval Service. They are also the United Kingdom's specialists in mountain warfare and Arctic warfare. A core component of the country's Rapid Deployment Force, the Corps' 3 Commando Brigade is capable of operating independently and is highly trained as a commando force. It can deploy quickly and fight in any terrain in the world.

The Royal Marines are a maritime-focused, amphibious, light infantry force capable of deploying at short notice in support of the United Kingdom Government's military and diplomatic objectives overseas and are optimised for operational situations requiring highly maneuverable forces. As the United Kingdom Armed Forces' specialists in cold weather warfare the Corps provide lead element expertise in the NATO Northern Flank and are optimized for high altitude operations.

Royal Marines recruit training is the longest basic modern infantry training programme of any NATO combat troops.[6] The Royal Marines are the only part of the British Armed Forces where officers and other ranks are trained at the same location, the Commando Training Centre Royal Marines (CTCRM) at Lympstone, Devon. Much of the basic training is carried out on the rugged terrain of Dartmoor and Woodbury Common with a significant proportion taking place at night. Before beginning Royal Marines recruit training the potential recruit must attend a Potential Royal Marine Course (PRMC) held at CTCRM. PRMC lasts three days and assesses physical ability and intellectual capacity to undertake the recruit training. Officer candidates must also undertake the Admiralty Interview Board.

Officers and Marines undergo the same training up to the commando tests, thereafter Marines go on to employment in a rifle company while Officers continue training. Officer candidates are required to meet higher standards in the Commando tests.

Basic training
The first weeks of training are spent learning basic skills that will be used later. This includes much time spent on the parade ground and on the rifle ranges. Physical training at this stage emphasizes all-round physical strength, endurance and flexibility in order to develop the muscles necessary to carry the heavy equipment a marine will use in an operational unit. Key milestones include a gym pass out at week 9 (not carried out with fighting order), which shows that a recruit is ready for the Bottom Field, a battle swimming test, and learning to do a "regain" (i.e. climb back onto a rope suspended over a water tank). Most of these tests are completed with the ever present fighting order of 32 lb (14.5 kg) of Personal Load Carrying Equipment. Individual field craft skills are also taught at this basic stage.

This intense phase ends with a series of tests which have remained virtually unchanged since World War II. Again, these tests are done in fighting order of 32 lb (14.5kg) of equipment.

The commando tests are taken on consecutive days; they include;


The day after the 30 mile march, any who failed any of the tests may attempt to retake them that day.

Completing the Commando course successfully entitles the recruit or officer to wear the coveted green beret but does not mean that the Royal Marine has finished his training. That decision will be made by the troop or batch training team and will depend on the recruits or young officer's overall performance. Furthermore, officer training still consists of many more months.

Training to be a Royal Marine takes 32 weeks (over eight months). The last two weeks is mainly administration and preparing for the pass out parade. Recruits in their final week of training are known as the King's Squad and have their own section of the recruits' galley at Lympstone.

After basic and commando training, a Royal Marine Commando will normally join a unit of 3 Commando Brigade. There are three Royal Marines Commando infantry units in the Brigade: 40 Commando located at Norton Manor Camp near Taunton in Somerset, 42 Commando at Bickleigh Barracks, near Plymouth, Devon, and 45 Commando at RM Condor, Arbroath on the east coast of Scotland.

There is also a Reserve Commando Course run for members of the Royal Marines Reserve and Commando units of the Territorial Army.

Training for these specializations may be undertaken at CTCRM or in a joint environment, such as the Defence School of Transport at Leconfield or the Defence Police College.

Some marines are trained in military parachuting to allow flexibility of insertion methods for all force elements. Marines complete this training at RAF Brize Norton (but are not required to undergo Pre Parachute Selection Course (P-Company) training with the Parachute Regiment).